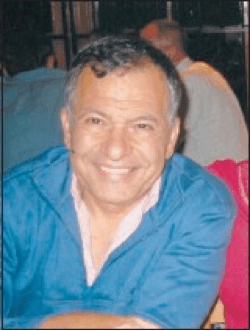 HEART OF GOLD: Waste disposal expert Christos Eleftheriades will be sorely missed by communities and organisations he supported during his fruitful life. The South African and international academic and business communities have lost an irreplaceable giant in Christos Eleftheriades.
Dr Christos, as Eleftheriades was affectionately called, funded the ANC election campaigns in the Ekurhuleni and Tshwane regions.
He also funded community projects in Tembisa through ANC councillors whenever he was approached to assist. He helped shack dwellers when fire burnt down their homes.Eleftheriades also promoted soccer development in Tembisa by establishing the A-Thermal Waste Awareness Cup last year through the local football association.
At the time of his death last week, the Gauteng education department was in talks with Eleftheriades’ company for support and funding to promote soccer and netball at all high schools and FET colleges in Ekurhuleni from 2015.
After obtaining his PhD in chemical engineering from the University of Natal, Eleftheriades was retained by the university as a lecturer. Thereafter, he joined the Centre for Scientific and Industrial Research in Pretoria as a senior researcher, and became an internation- ally renowned scientist.
Eleftheriades bought shares and became a coowner at waste management company Thermopower Process Technology in Olifantsfontein. Under his daily expert guidance, the company distinguished itself as a waste management company that completely dissolved waste instead of incinerating it.
The then Scorpions totally trusted the company to destroy illegal drugs confiscated as far as Durban after arriving from Asia and South America. Even the Italian Airports Company recruited his company’s expertise in disposing of hazardous waste in Italy.
Locally, Thermopower became a highly trusted waste manager for giants such as Vesuvius, Sasol and ArcelorMittal.
Two years ago the company was rebranded A-Thermal Retort Technologies when Eleftheriades became sole owner.
He was a keen supporter of the broad-based economic empowerment policy from its inception.When the ANC Progressive Business Forum was founded in 2006, his company became a member.
Organisations he supported included CDIO Institute For Africa, for research into the advancement of science, mathematics, engineering and technology in SA.
In 2005 former president Thabo Mbeki seconded former science and technology minister Mosibudi Mangena to work with the institute.This led to several Unesco-endorsed research programmes as well as the establishment of the African Engineering Education Association.
Eleftheriades, who died on October 29 after a year-long battle with prostate cancer, was buried in Johannesburg on November 1.
Source: www.pressreader.com/south-africa/sowetan/20141106/281870116720088