SA on its way up the waste management hierarchy 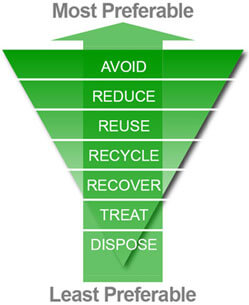 South Africa is beginning to experience a progression in waste management and starting to explore innovative technologies in dealing with waste in a responsible manner, says Jan Palm, president of the Institute of Waste Management of Southern Africa (IWMSA).
Palm says the institute is supportive of this progression as it will inevitably push South Africa up the waste management hierarchy.

The institute says that in an ideal world, source reduction is the most desirable option to manage waste. It’s as simple as: if less waste is produced then less needs to be disposed of. Reducing waste at its source looks at the very beginning stages of a product’s lifecycle.
“The challenge that presents itself here is that everything that is newly produced, has to be looked at as if it were waste, even in its newest form,” Palm explains. “As a producer of a product, one has to take into consideration what happens once the product leaves the factory.”
‘Design for Environment’ (DfE) is a product design concept that encompasses source reduction and takes into consideration the environmental impacts throughout the product’s entire lifecycle.
Smarter material choices, recyclability, biodegradability and reusability are placing pressure on the producer, extending responsibility past production, Palm explains. This is known as ‘Extended Producer Responsibility’ (EPR) and is currently being used as a regulatory mechanism in South Africa’s National Environmental Management: Waste Act 59 of 2008 (NEMWA).
“It is critical that we adopt such mandatory approaches to implement the first two levels of the waste management hierarchy,” Palm says.
In Sweden, legislation on EPR requires producers to meet statutory requirements to have their products recycled. In response to this legal requirement, many producers have relied on ‘bring back’ systems such as product-specific recycling depots, which has mostly extended to paper, electronic waste (e-waste), and tyres.

Mechanisms have been employed to successfully implement EPR in South Africa to support source reduction, recycling and materials reuse. A combination of EPR, conscious consumerism and incentives support the first two levels of the hierarchy.
Palm said a common example is a ‘deposit refund system’ which is used to provide a monetary incentive for the consumer to return a product or a package in order for it to be reused.
In South Africa, glass beverage bottles are commonly returned for money. However, Palm says this only addresses one priority product according to the NWMS (2011). Plastic bags, tyres, and e-waste have also been prioritised for an EPR approach.
Tyres as waste have seen a progressive move up the hierarchy with the formation of the Recycling and Economic Development Initiative of South Africa (Redisa). According to Redisa, almost 11 million tyres become waste in a year. “The company’s Waste Tyre Management Plan supports tyre recycling and reuse instead of polluting the environment,” Palm says.
Figures given by the Department of Environmental Affairs indicated that e-waste makes up 5% to 8% of municipal solid waste in South Africa and is growing at a rate three times faster than any other form of waste. “South Africa produces 346 kilotons5 of e-waste per year and most of it still goes to landfill,” Palm says.
A number of European countries have mandated EPR in terms of recovering e-waste with targets of a 50 to 90% recovery rate. In 2008 the e-Waste Association of South Africa (eWASA) was established to work with manufacturers, vendors, and distributors of electronic and electrical goods and e-waste handlers (including re-furbishers, dismantlers, and recyclers) to manage e-waste effectively.
“This approach in dealing with e-Waste brings us to the next stage of the waste management hierarchy: recovery,” Palm says.” The e-waste stream is one such stream with economic potential that can be mined for secondary raw materials”.
Following the approach of many European countries, Palm says it is important that South Africa looks at waste as a resource with economic potential.
In 2012 the World Bank placed South Africa as the 15th largest waste generator, stating that the average South African produces 25 tonnes of waste in their lifetime. Waste-to-Energy (WtE) is an approach which recovers energy that has seen increased implementation worldwide, especially in Sweden. Palm says that not only does it address the issue of municipal waste, but it also looks at the production of electricity.
“Currently, South Africa sends the majority of its waste to landfill sites and it therefore remains critical that the impacts are effectively controlled,” Palm says. “The IWMSA seeks to address the practice so that this waste management option is supported by the best technology and science until we move to more desirable options up the hierarchy.”
Source: http://www.infrastructurene.ws/2017/04/19/sa-on-its-way-up-the-waste-management-hierarchy/#