Our Superior Technology I Thermal Desorption

Waste material is fed into a rotary furnace where it is subjected to temperatures between 250⁰C to 650⁰C
The waste material within the retort is indirectly heated – volatile and semi-volatile organic compounds (VOCs and SVOCs) being liberated into the gas phase.
The carbonised residue, which remains in the retort, is then cooled and sampled before being placed into one-ton capacity bulk bags.
The carbonised residue is classified according to the waste classification and management regulations and removed in a GLB+ landfill site. 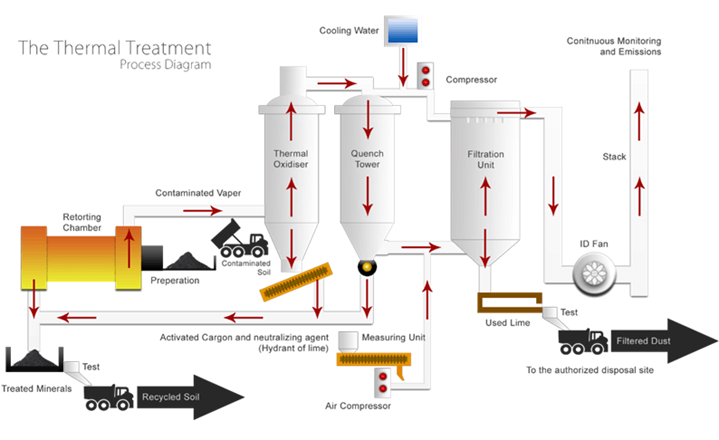 The off-gases from the rotary furnace then pass through a thermal oxidiser, where the gases are exposed to oxidative conditions– and necessary turbulence at temperatures in excess of 1100 °C for a period longer than two seconds.
The thermal oxidiser converts the non-condensable VOCs into combustion products, namely carbon dioxide and water.

The off-gases from the oxidiser are subsequently cooled and passed through a mercury filter system, which serves as a secondary measure and adsorbs trace amounts of mercury that may be present in the off-gas stream.
Off-gases are finally polished in the gas clean-up plant, before being emitted from the stack.

The stack is continuously monitored for the following emission-gas concentrations:

A rotary kiln is used for the pyrolysis of waste, using electricity to maintain a temperature of 650 °C. Pyrolysis (also known as ‘retorting’) is the thermal treatment of a material without oxygen. At high temperature, organics and water are vaporised, leaving a carbon-rich residue.

The resulting gas stream is fed to a thermal oxidiser, which operates at 1100 °C.
Here, air is introduced for combustion of all organic compounds to carbon dioxide and water.
The gas in the oxidiser has a residence time of two seconds in a turbulent gas flow, to ensure complete combustion of the organics, with a destruction efficiency of 99.9999%.

After thermal oxidation the gases are quenched to lower the gas stream’s temperature to under 100 °C in less than one second.
This sudden cooling reduces dioxin and furan formation.
Gases pass through a Venturiscrubber, in order to remove particulates and neutralize acids, and enter a packed column for final gas cleaning.

the solid residue consists of inert – decontaminated material from the kiln is collected, stored and tested for the presence of heavy metals. Once results are received, the residue is de-classified and can be safely sent to an appropriate landfill. In rare cases, if results do not comply with legislative requirements, the residue is re-treated in the plant.

All the particulates caught in the gas clean-up system are sent to settling tanks. Once the particles have settled, the water slurry is pumped to a filter press where all the excess water is removed and a filter cake is collected. The filter cake is mixed with the residue for declassification and the water is returned to the plant. Thus, the whole gas clean-up system is closed with zero liquid effluent.

The gas discharged to atmosphere is continually monitored using a combination of analysers: dust (particulates),CO, CO2, SO2, NOx, HCl, HF, VOCs, benzene and mercury. This is in accordance with permit requirements.