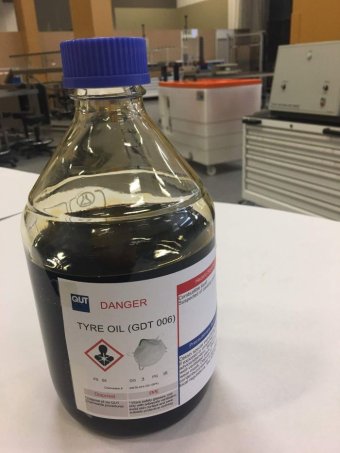 It hopes to increase production to more than 8 millions litres annually by mid-2017.Director Trevor Bayley said the company used a technique known as destructive distillation to convert wasted, old rubber into renewable energy. He said the idea was driven by a desire to reduce massive stockpiles around the world which are growing at a rate of over a billion tyres a year.
“We are able to convert this wasted resource and environmental hazard into high demand valuable raw materials,” Mr Bayley said.
“The process is emission-free and some of the recycled oil is used as the heat source for the production process.
“It begins by loading end-of-life tyres into a process chamber, which is evacuated of air and sealed.
“Heat is applied which acts as a catalyst for a chemical reaction, which sees the tyre destructed into different compounds, one of which is condensed into manufactured oil.”
‘We have zero waste from the tyre’
The oil underwent rigorous testing at the Queensland University of Technology’s (QUT) Biofuel Engine Research facility.
Although scientists there admitted they were a little sceptical at first.”So we think maybe it will be bad, but we got very good results,” researcher Farhad Hossain said. The team tested the tyre-oil blends in a six-cylinder diesel engine.
Source: http://www.abc.net.au/news/2016-11-28/new-life-for-old-tyres-as-biofuel/8064350